This is a test of the high-capacity variants of the Sanyo eneloop brand. Cells are courtesy of dcpower.eu. The "XX" brand is a development of the Eneloop pro — the second-gen, actually (HR-3UWXB) — boasting high-cap cells with reasonable self-discharge rates. These are 10% per year, according to Sanyo, which is ostensibly not quite true, as I measured 11% after only a month. They really shine on the one hour test, though, where they beat the Pro slightly: 2380 vs 2260 mAh. In the month-later test, the differences level out.

But let's look at this particular specimen: The cells I got from the store were nine month old at unpacking, and had around 1240 mAh of factory charge remaining. The MAHA indicated capacities in the range 2490-2620 mAh while forming. One cycle (2260 mAh) and an hour later, the batteries showed 5.74V initially, dropping to 5.72V after the heat-up. The real one-hour test counted around 2380 mAh, one of the highest amongst AA-sized cells. Next charge: 2570-2670, an agreeable balance. At the start of the 5-day test I measured 5.48V - stable - and a capacity of circa 2220 mAh. A month later the batteries started from 5.40V (again without difference before/after heat-up), and clocked 2120 mAh.

In conclusion: this is a very serious model, packing enough remaining capacity after time even if it had not-so-stellar self-discharge rate. Yet, the improvement over the previous generation is quite modest. 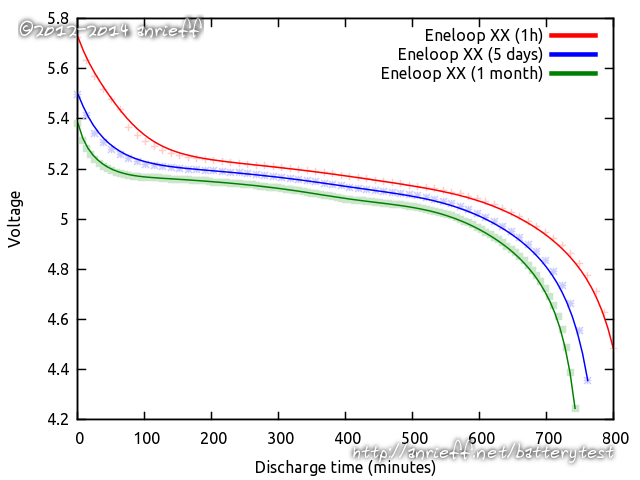 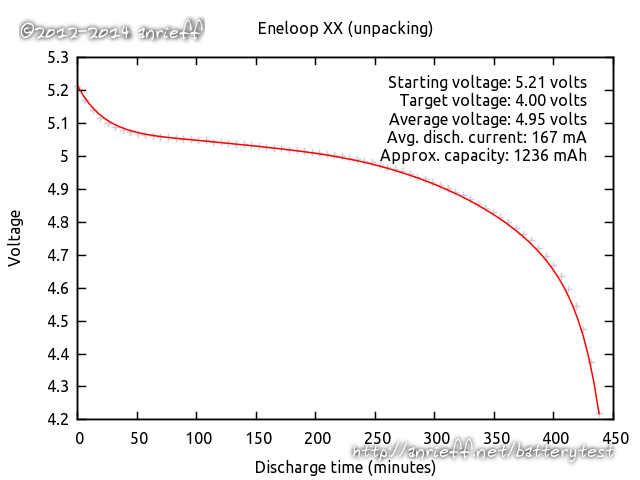