The Varta Lithium series batteries utilize a different chemistry - Li-FeS2. Electrically, they hold a slightly higher voltage, compared to the alkalines: immediately after the unpacking I measured 7.40V (1.85V per cell), which is significantly above the usual for an alkaline-powered pack (6.3-6.4V, around 1.55-1.60 per cell). After the 30-second heating phase, the voltage fell to 7.03V, but this is still quite high. The average voltage across the discharge - 5.48V - is slightly more than half a volt above the alkaline/NiMH chemistries. The following chart visualizes the difference clearly: 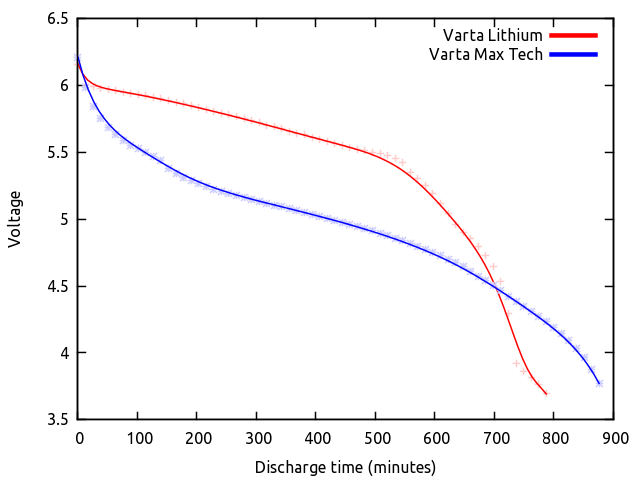 If you put lithium batteries in an electronic device, designed for alkaline/NiMHs, it would behave as if the batteries inside are fresh new most of the time (devices with motors would turn energetically, flashlights will shine brightly, etc.)

The other significant difference is their weight - lithium cells are surprisingly light, which is sensible even when you hold them in your hand. Indeed, the four cells weigh just 61 grams, whereas an alkaline pack like the Ikea Alkalisk is 95 grams for the four cells, and NiMH cells are even heavier, at 115 grams for a Panasonic rechargeable set.

The lithium batteries should, in theory, have higher capacity than the alkalines. The ones I tested scored among the best of the AA type, but there's still something to be desired in terms of performance. Being puzzled, I measured individual cell voltage immediately after the main discharge, and here's what I observed:

I.e., the low score is caused by poor bundling; more balanced packs could have scored better.

Lithiums like these are often praised for their superior extreme-temperature performance. The regular user would be particularly interested in cold-weather uses (i.e., for a photocamera in the winter). How much exactly they have an edge to the alkalines in this regard is to be tested soon (I'm going to conduct some tests in a freezer :)). 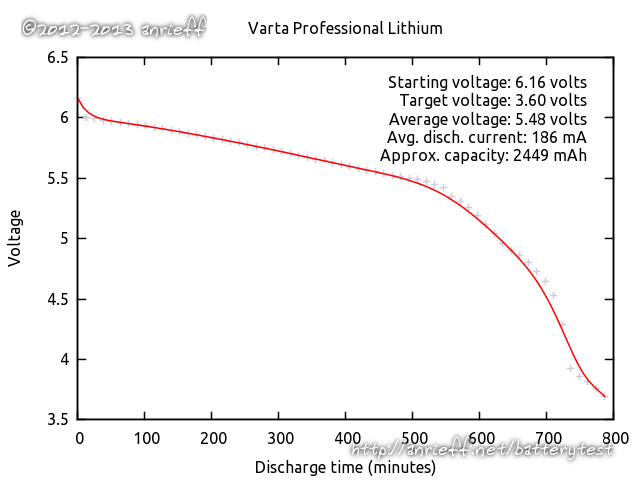 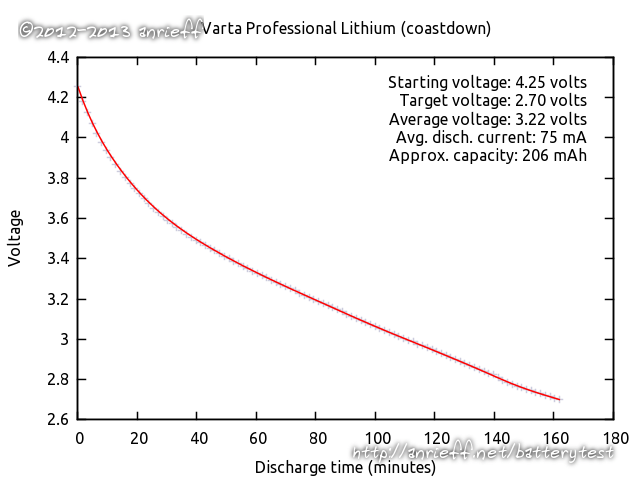 (As mentioned, one of the cells was dead after the main discharge. The coastdown was performed with the remaining three.)